Our in-house craft brewery revives a brewing tradition in McMinnville started in 1878 by Anton Ahrens and W.R. Bachman of Ahrens Brewing Company. We  produce handcrafted beers of exceptional balance and complexity for your enjoyment at one of our brewpubs or at home.

Golden Valley Brewery started production in 1993 and was the 12th post-prohibition micro-brewery in the State of Oregon. Prior to opening in 1993, the Kirchers purchased a used brewery system of converted dairy tanks from an old brewery in Canada. After Peter attended the Seibel Institute for Brewing sciences in Chicago Illinois in spring of 1993 he was convinced it was impossible to produce consistently high-quality beer with the open fermenters and tanks of the used system, so he promptly sold it and purchased the system still in use today. Golden Valley’s brewery system was manufactured by JV Northwest in Canby, Oregon. They are one of the largest manufacturers of brewery and winery equipment in the U.S.

Brewery system capacity was originally 7 barrels (14 kegs) per brew and could produce about 1,000 barrels annually. John Harris engineered the brewery start up. He was the head brewer at Full Sail Brewery and worked at Deschutes Brewery in the early years. John Eliassen was our first head brewer and winemaker. John was trained in France for winemaking and made all seven vintages of our Golden Valley wines which were produced from the family vineyard located in the Red Hills, North of McMinnville. The Kirchers sold the vineyard operation in 1998 which was also the last vintage of Golden Valley Pinot Noir.

In 2015, the brewery and warehouse were expanded and moved up from the 7 barrel system to a 15 barrel system, adding larger fermentation, cellaring vessels and bottling line. The new system is also JV Northwest.

Red Thistle was John’s first beer and is still a best-seller today along with the highly anticipated seasonal brew, Tannen Bomb. Both beers have been a great success for the brewery.

In 1995, we sold 252 kegs of Tannen Bomb that winter. In 1996, six of the major micro-breweries in the state all tripled their capacity at the same time and that changed the whole dynamics of the wholesale market for Golden Valley. 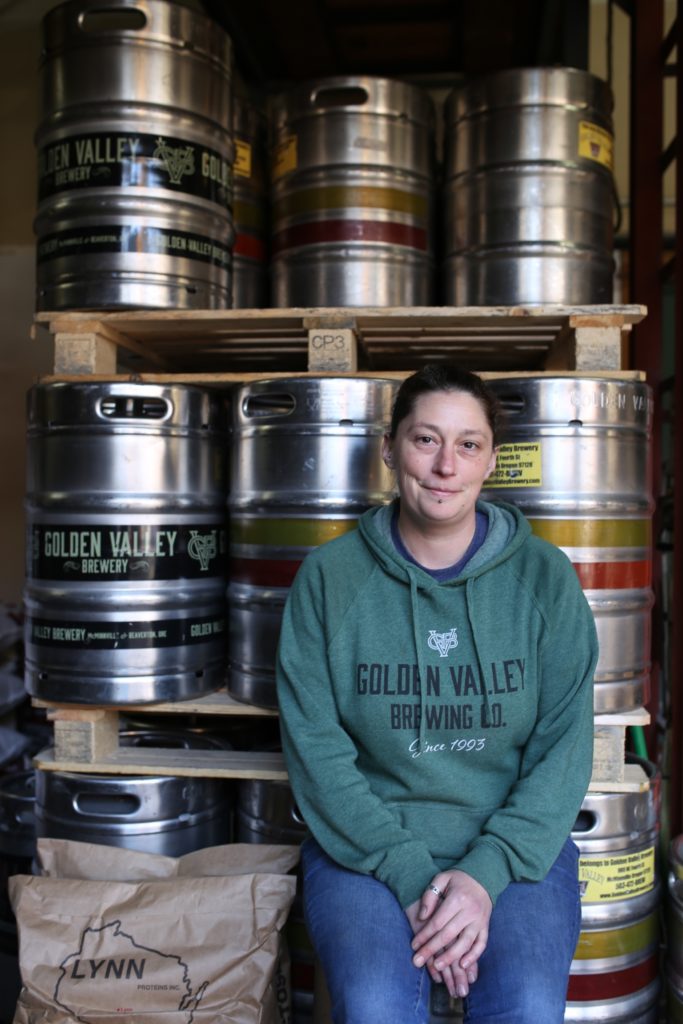 Piper has been working for Golden Valley for 3 years as assistant brewer prior to taking the position.

Piper has always been very passionate about beer and brewing; she feels she is lucky to do what she loves and still call it work.

Piper got her professional start at the Fort George Brewery in Astoria, Oregon where she ran their 10-barrel system for five years. Fort George has been producing award winning beers and stellar IPAs since 2007.  There she had hands on experience creating standard beers as well as recipe development with fun new brews.

After five years, Piper then moved over to the production side of brewing for the Fort George. She got experience working together with other brewers as a team, collaborating on recipes, and making 30-barrel batches to fill 120-barrel fermenters. She also has experienced working on the canning line to bring delicious beer to the masses.

Piper has attended hop and brew school, wyeast classes, many brewing seminars, and is always learning new techniques as our industry grows and develops. Now that she is at Golden Valley Brewery, Piper gets to make our delectable house brews as well as bringing some new flavors to the table and bottle these wonderful beers for all to enjoy.